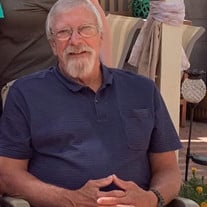 After a brief illness with cancer, Walt passed away peacefully at St. Peter’s Hospital in Helena, MT on the evening of October 13, 2021 with his family by his side. Walt was 68 years old. Walt was born on February 13, 1953 in Merced, California. He was the oldest and first son of Orville “Buzz” Eugene Blatherwick and Ruth M. Peterson. Walt grew up in Merced, California where he received his high school education. After he graduated, Walt took on various part-time jobs including painting houses, which lead him to open his own business as a painting contractor. Walt was involved in softball, bowling, and other activities that he enjoyed. In 1973, Walt met the love of his life, Terry and were married on June 23, 1973. They had three beautiful children together. An amazing husband and father, Walt was always involved with his children’s activities from dressing up for Halloween and taking his kids out trick-or-treating, to coaching their various sports activities. In 1991, Walt and Terry decided on a new adventure to Montana. Walt started his career as a cabinet builder with Kralicek Millworks where he worked for 23 years. After a fire caused the facility to close, Walt then carried his cabinet building skills to various cabinet shops. At the time of his death, Walt was working for BMC West. Walt had many pastime hobbies which included but were not limited to; airbrushing, Model railroading, woodworking, and his most favorite of them all, bowling. Walt was an avid bowler where he became the captain of his team, It’s Us, alongside his best friend, John Covert. Walt spent many Wednesday nights and weekends traveling for bowling tournaments. In March of 2021, Walt bowled his first 300 game and was filled with pride at such an achievement. After that, no matter who you were, Walt was sure to share his exciting story. Walt was preceded in death by his father, Orville “Buzz” Blatherwick; his step-father, Richard Peterson; and his nephew, Thomas Morris. Walt is survived by his wife of 48 years, Terry; and their three children, Bridgette (Chuck) Tovey of Kalispell, MT; Sabrina (Erik) Jensen; and Keenan Blatherwick of Helena, MT; his mother, Ruth M. Peterson of Mountain Home, ID; his brother Gregory Alan Blatherwick of Spokane, WA; his sister, Debra Elaine Hayton of Mountain Home, ID; and his step-mother Victoria Jane Blatherwick of Albuquerque, NM. Walt is also survived by his six grandchildren, Rebecca and Amanda Tovey of Kalispell, MT; Tyler Frantz of Osceola, IA; Maddy Blatherwick of Helena, MT; Christian and Mason Jensen of Helena, MT; one great-grandchild, Kinsley Eastham of Kalispell, MT; along with numerous nieces and nephews. Last but not least, his cat Milly, whom he called his “Baby Girl”. Walt’s family would like to extend their appreciation to all the nurses and doctors with the Oncology Unit at St. Peter’s Hospital, for their care and kindness. A celebration of Walt’s life will be planned at a later date.

After a brief illness with cancer, Walt passed away peacefully at St. Peter&#8217;s Hospital in Helena, MT on the evening of October 13, 2021 with his family by his side. Walt was 68 years old. Walt was born on February 13, 1953 in Merced, California.... View Obituary & Service Information

The family of Walter Eugene Blatherwick created this Life Tributes page to make it easy to share your memories.

After a brief illness with cancer, Walt passed away peacefully...

Send flowers to the Blatherwick family.