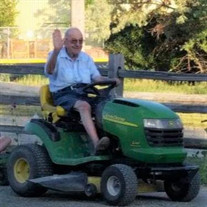 Walter passed away on January 28, 2020. Walt was born in a sod house on January 30, 1923 near Burlington, Colorado to Martin and Anna Bauer. He was raised on their wheat farm and started helping his dad in the fields and driving the wagon at age six. He played football and ran track in high school. Nicknamed “Lefty”, he graduated from Burlington High in 1941. Walt was drafted into the Army and started Army Specialized Training Program at South Dakota State. He was sent overseas as a sniper and fought in France and Germany. While fighting in the Ruhr Pocket, he was wounded on April 13, 1945. He incurred shrapnel wounds for which he was awarded the Purple Heart. He served as Commander of the Military Order of the Purple Heart and on the board of MT Veteran’s Cemetery program. He was a lifetime member of Disabled American Veterans. On December 4, 1948, Walt married Phyllis from Bridgeport, NE in Denver, CO. They raised their family in Aurora, CO. Walt’s career as a financial advisor started when he served as Vice-President for Gordon Brown Securities. He later became an independent advisor and served clients throughout the Western Plains states. Partially retired, Walt and Phyllis moved to Bozeman and later to Helena, MT. Walt was always an active member and leader in the Lutheran church: St. Mark’s Lutheran in Aurora, Hope Lutheran in Bozeman and Our Redeemer Lutheran in Helena. He was a member of the Lions Club in Aurora and Bozeman, serving as Governor of the Lion’s Club in Co. He was an avid gardener who was famous for his sweet pea flowers and “Garden of Eat’n”. Walt also enjoyed bowling, horseshoes, fishing, hunting, the Denver Broncos and playing cards with family and friends. He traveled all over the West taking his family on camping and sight-seeing trips. Walt was most loved for his sense of humor and was always ready with an entertaining story or joke. Walt is survived by his wife of 71 years, Phyllis; three children and their spouses: Babs and Rick of Spokane, WA; Carla and Steve of Bozeman, MT and Ron and Judy of Helena, MT. He was a proud grandfather to Randy and wife Jess, Brian, Nikki and husband Mark, Nathan, Jon and wife Joanna, Stacy and husband, Tim. He counted 10 great-grand children as blessings: Ariana, Owen, Dylan, Serenity, Dezian, Cody, Ellie, Tanner, Sydney and Nora. A memorial service will be held at Our Redeemer Lutheran Church in Helena, MT on Feb. 21, 2020 at 11 AM with Military Honors following at 2 PM at Montana State Veterans Cemetery, Fort Harrison, MT. In lieu of flowers, memorials in honor of Walter can be made to Our Redeemer Lutheran Church at 3580 N. Benton, Helena, MT 59602

Walter passed away on January 28, 2020. Walt was born in a sod house on January 30, 1923 near Burlington, Colorado to Martin and Anna Bauer. He was raised on their wheat farm and started helping his dad in the fields and driving the wagon at... View Obituary & Service Information

The family of Walter Richard Bauer created this Life Tributes page to make it easy to share your memories.

Send flowers to the Bauer family.