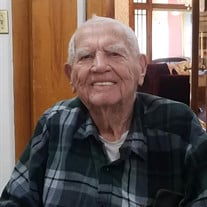 Wallace (Wally) G. Brinkley, 90, passed away peacefully on September 15, 2019 at the Masonic Home in Helena, Montana. Wally passed away from a long struggle with Congestive Heart Failure. He was born to Edward and Clara Brinkley on April 17, 1929 on a small farm in Manchester, South Dakota. Wally was one of five children. After graduation he worked various jobs until he joined the Navy during WWII. He was assigned to the USS Renville and became a Fireman 1st Class Specialist and Motion Picture Specialist where he learned to run movie projectors for the movie theaters. At the end of the war, he returned to the states and went to school to become a mechanic. He married Beverly Bittner on New Year’s Eve 1951 and they had one daughter, Gail. After moving to Helena, he owned and operated a gas station located across the street from the Civic Center. He worked part-time running the projectors at the Sunset and Sky-Hi Drive in, as well as at the Gaslight Theater. Wally had a short stint as a Helena Police Officer until being offered a job with the Electro Photo Systems developing driver’s licenses where he worked for 30 years. Upon retirement, Wally and Bev became snowbirds. They loved riding Harley motorcycles and he made his last purchase at the age of 86. He was an avid flyer and purchased his own Cessna which they enjoyed for several years. After the death of Beverly in 2001 he continued travelling and later married Lavina Coutts which he had known since his school years. Several years later Lavina died and he decided to make Yuma his permanent home coming back for a month or two to visit with friends and family. In addition to his parents, Wally was preceded in death by his three sisters, Eva, Leona and Ora and a brother Floyd who died in infancy. Wally is survived by his daughter Gail and her husband Mike Zimmerman and six grandchildren, Kelly (Kori), Julie Sakaguchi, John, David (Brandi), Tim and Steven (Jen). Wally had four great-grandchildren, Maci and Jacob Sakaguchi, and Taylor and Kamri Zimmerman. He left behind his dear friend and companion Aileen Edwards. In lieu of flowers, please send memorial donations to Hospice of St. Peter’s, 2475 Broadway, Helena, MT 59601. Also, we would like to extend a big thank you to the Masonic Home and their wonderful staff for their excellent care of Wally.

Wallace (Wally) G. Brinkley, 90, passed away peacefully on September 15, 2019 at the Masonic Home in Helena, Montana. Wally passed away from a long struggle with Congestive Heart Failure. He was born to Edward and Clara Brinkley on April 17,... View Obituary & Service Information

The family of Wally Brinkley created this Life Tributes page to make it easy to share your memories.

Send flowers to the Brinkley family.