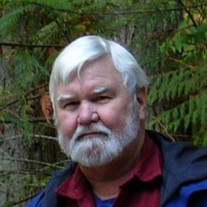 Thomas Lee Leonard passed away on September 24th after a 2-year battle with interstitial lung disease. Born in Billings on February 12th, 1946, to Joe and Edna Mae Leonard, Tom was a Montanan thru and thru enjoying all outdoor activities, hunting, and water sports, but he was also a man of the world. As a child he lived in Roundup, Lewistown, Libya (N. Africa), and White Sulphur Springs where he spent his high school years. Attending college before and after two tours of duty in Vietnam with the Navy, he graduated from MSU with a degree in zoology. He worked several summers as a firefighter for the Forest Service while in college, and later pursued a career at Helena Job Service, first as an interviewer and later a program manager, retiring in 2000. This career fit perfectly with his innate desire to help others and satisfied his social side! Tom was also a skilled picture framer doing this as a part-time business of out his home for over 20 years. Tom established friendships everywhere he worked, lived, and traveled. He never met a stranger, seeing only the good and value in everyone. He felt that his endless sense of curiosity was developed as a child living in different cultures, which drove his love of travel later in life. Tom was a man of diverse interests, knowledgeable in photography, geology, forestry, ornithology, plants, and wildlife. Hiking with Tom was never just about getting to the destination; he would give you the scientific names of flowers and birds before telling you it was a ‘daisy’ or a ‘bluebird’. On his many road trips, he would act as a tour guide pointing out interesting local facts and advising what geological era formed a mountain. However, he wasn’t just a nature buff and was frequently called upon by friends and family to help with new features or issues with electronic devices. As a talented techie always up to date on his knowledge, he could educate people decades his junior. Tom’s photos and travel adventures were shared for the enjoyment of others on Montanica, Instagram, and Facebook. Life took him to interesting places, including his 4 years as a child in Libya, time in Vietnam, adventures in all 50 states, Canada, and Italy, and he was thoughtful in the photo documentation of his travels. Following Tom on social media or looking thru his photo albums was a way to travel without leaving home. Much more than all of this, Tom was a kind and friendly soul who could visit with anyone he met on any topic of interest to them and make his conversation companion feel seen and heard. While he did not have children of his own, he was a loving, unofficial ‘uncle’ to the children of close friends, attending games and important events whenever possible. He kept up with local and world news; could readily recite an entertaining limerick to the laughter of friends and family; spoke enough to get by in Arabic, Spanish, and Italian; was a wine connoisseur; a skilled photographer; and most importantly a caring and well-loved man of character. You were very lucky if you could call him your friend. He was married to Kathy Rae Leonard and Karlene Keffer Ford Leonard in his earlier years and married Shirley Singer Rush in 1999. Their life was full of love, laughter, friends, family and travel throughout the US, Canada, and Italy. Tom was predeceased by his parents Joe and Edna Mae, sister Mary Elizabeth, and brother Michael James. He is survived by Shirley Rush, stepson Greg Rush, and daughter-in-law Brittani Hissom. Tom received excellent care throughout his illness at every step of his journey, both at St. Peter’s Hospital in Helena and the Huntsman Institute in Salt Lake City. We are forever grateful for the excellent care and kindness he and Shirley received. Thank you to these angels! A memorial service will be held at a later date and memorials may be made to St. Jude’s Children’s Hospital or the Shriner’s Children’s Hospital.

Thomas Lee Leonard passed away on September 24th after a 2-year battle with interstitial lung disease. Born in Billings on February 12th, 1946, to Joe and Edna Mae Leonard, Tom was a Montanan thru and thru enjoying all outdoor activities, hunting,... View Obituary & Service Information

Thomas Lee Leonard passed away on September 24th after a 2-year...

Send flowers to the Leonard family.