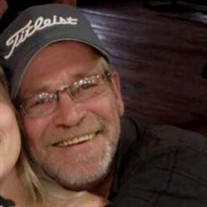 You can take the man out of the fight, but you can’t take the fight out of the man. On the night of Friday February 19th, 2021, God took Theo Nehl out of his fight with cancer at the age of 64. We are forever thankful for March 23, 1956! Growing up in South Dakota with his five siblings, Theo was raised with a strong work ethic that carried him through life. After graduating high school, Theo’s life journey took him to Montana where he tried his hand at many different trades. Young and curious of what else the world had to offer, Theo became a semi-truck driver for a short time. He enjoyed driving truck and had many stories of traveling across the country, but ultimately decided construction gave him more satisfaction, and returned to a trade he knew so well. He was an amazing handyman, willing to do any job that was put in front of him. Theo put his heart into his work and sometimes would rather barter/trade than accept money as a form of payment. No job was ever too big or too small, and he always loved a challenge. In his early 20’s Theo began a family of his own by welcoming a daughter, Reylin, in 1979; a son, Coleman, in 1981; and a daughter, Nicci, in 1987. In the summer of 1990 Theo was introduced to his soulmate, Lisa. The two hit it off almost immediately (despite his corny one-liner), moved to Washington a couple of months later and eloped soon after. Over the years Theo and Lisa enjoyed playing pool, dancing, rodeos, fishing, four wheeling in the mountains and road trips. While living in Washington, Theo unexpectedly fell in love with the game of golf and excelled. Golf brought many lifelong friends into Theo’s life. Before leaving Spokane and making Helena their forever home, they welcomed daughter Taylor in 1993. Happy to be back in Montana, Theo spent his spare time golfing, fishing, and hunting; hunting camp turned into one of his annual traditions and he could spend hours talking about the fun times spent with good friends. While working hard and enjoying life, daughter Weslee joined their family in 1999. As his love of golf grew, he was overjoyed to share his wisdom and knowledge (as he liked to say) with his family, including taking credit for his daughters’ golf careers throughout high school and college. He loved playing in any golf tournament he could, but especially loved the ones he was able to play in with one of his daughters by his side. Theo took pride in anything and everything he did; whether it be his home improvements, his yardwork/gardening, his cooking/BBQing skills (including his self-proclaimed famous potato soup) or the relationships he carried with him until his final days. Theo did his best to maintain strong connections with family and friends. He valued his countless visits to his siblings, and enjoyed time spent with old classmates and new friends. A classmate and good friend of Theo’s said that he had such a vibrant personality, the room lit up when he entered. Theo made friends easily with his wit, contagious smile and easy-going nature. Along with his family, Theo’s friends were his support system, and he cherished every single one of them dearly. Theo’s diagnosis of Stage 4 lung cancer in November 2020 got in the way of his yearly hunting trip to Turner (which he always looked forward to), and ultimately and sadly prevented him from reaching all his life goals. Theo (Uncle Thow) leaves a lasting impression on everyone who was fortunate to have known him and our hearts are broken, including our dog Hannah who decided she couldn’t be without him and left this world on February 25, 2021. Theo is survived by his wife, Lisa (Gross) Nehl; daughters, Weslee, Taylor, and Nicci; son, Coleman; siblings, Roxann & Richard Glines, Penny Rinderneck, Kurt & Nancy Nehl, and Bill Nehl; in-laws, Jim & Sandra Gross, Steve Gross, Lori & Joe Burglin, Karen & Bill Keller, and Kristi & Rob Starz; grandchildren, Maverick, Christian and Amelia; and so many special nieces, nephews, and dear friends. Theo was preceded in death by his parents, Ted & Eileen; brother, Ron; daughter, Reylin Ryan; brother-in-law, Ron Rinderneck; niece, Amber Nehl; and several close family & friends. “Theo, you told me in the hospital that 31 years together was not enough, and you were so right. Time went by way too fast. Taylor, Wes and I will always love and miss you so, so much!” Celebration of life will be held at a later date.

The family of Theo Nehl created this Life Tributes page to make it easy to share your memories.

You can take the man out of the fight, but you can’t take the...

Send flowers to the Nehl family.