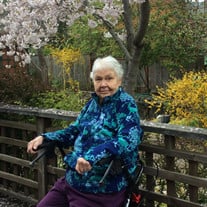 Suzanne Taylor was born in 1934 to Francis and Lewis Taylor in Charleston, IL. She grew up there and went to the University of Illinois where she earned a degree in Mathematics and a Masters in Library Sciences. She also met her future husband Paul Tipler. She moved to New York City to work at the NYC Public Library. She returned to Illinois after a year to marry Paul, and they had 2 daughters, Becky and Ruth. They moved to Rochester MI where Paul was a professor of Physics at Oakland University, and Suzanne worked in the cataloging department at the University Library. They went on several family camping trips to National Parks around the country during their summers, and also returned many times to their favorite place to camp, the “Pinery” provincial park in Ontario on Lake Huron. After the kids grew up Paul and Suzanne moved to Berkeley, CA. After their divorce Suzanne moved to San Francisco where she worked organizing the volunteers at the Friends of the Library at the J. Paul Leonard Library at San Francisco State University. She enjoyed Symphony and Chamber Music concerts, Plays, and Museums, all the cultural activities that a great city has to offer. She was also a nature lover and went on many camping trips, first in her truck and later in her Road Trek Van. She went to the Mojave Desert numerous times, to Anza Borego, Death Valley, and also Southern Utah. She especially liked to look at the stars in the night sky and have a camp fire. A couple of longer journeys in her van were her trip to Alaska, and her cross country trip. She also travelled many times to Oregon and Montana to visit her daughters and her grandson. She retired from the Friends of the Library at the age of 78, and after an injury moved in with her daughter Ruth and Ruth’s family in Ashland, OR. She then moved in with her daughter Becky in Boulder, MT. She travelled back and forth to spend her summers in Boulder with Becky, and her winters in Ashland with her daughter Ruth and Ruth’s family. She was an avid reader and especially liked a good mystery. She was a regular at the Boulder Library, and also was a regular at the Boulder Hot Springs, where she went almost daily during the summer months to exercise in the outdoor pool. During the winters in Ashland she was a regular at the Ashland library, and went to the pool at the YMCA to exercise classes there. She was a generous spirit with great intelligence and sense of humor, she will be greatly missed by her friends and family.

Suzanne Taylor was born in 1934 to Francis and Lewis Taylor in Charleston, IL. She grew up there and went to the University of Illinois where she earned a degree in Mathematics and a Masters in Library Sciences. She also met her future husband... View Obituary & Service Information

The family of Suzanne Taylor created this Life Tributes page to make it easy to share your memories.

Suzanne Taylor was born in 1934 to Francis and Lewis Taylor in...

Send flowers to the Taylor family.