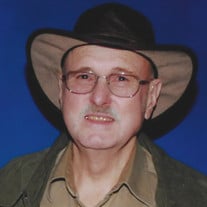 Montana Veterinarian, Sherman John Smith passed on February 3, 2020. John was born in Bozeman July 8, 1940 to Grace (Letz) Smith and Sherman B. Smith. John resided on the family farm near Bozeman with his parents and sister, Pat. He took part in operations on the farm, raising Milking Shorthorn cattle and Duroc hogs. John was active in 4-H where he was Grand Champion showman of the Gallatin County Fair and the Little International Livestock Show at Montana State University. John graduated from Gallatin County High School in 1958 and spent his first two collegiate years at Montana State University. In 1960 he was accepted in Veterinary School at Washington State University from which he graduated in 1964. It was at Washington State that he met the first love of his life, Emma Lee (Emmy) Bosse, whom he married on July 28, 1963. After Veterinary School, John served six years in the U.S. Army the first two as a meat inspector in Harlingen, Texas. In 1967 John, Emmy and their son, Sherm, returned to Bozeman. John spent 4 more years in the Army Reserves and worked in the Veterinary practice of Gerald Robertson. He also engaged in farming and raising Hereford cattle. In 1984 Joh, Emmy, and their daughter, Judy, moved to Three Forks where John purchased his own Veterinary practice. John remained involved in 4-H as a prominent Leader and was instrumental in the operation of the Montana Winter Fair. He was sought after in and out of state as a cattle judge and worked at the Midland Bull Testing Station where he successfully introduced semen testing as part of the testing process. During this time, he developed a tremendous Elk breeding program with Jack Bridgewater. In 2003 John sold his Veterinary practice and semi-retired. He and Emmy moved to Townsend where he continued to work with the elk and doing the bull testing. He and Emmy enjoyed his semi-retirement spending time in their 5th wheel, fishing and 4-wheeling. Emmy passed away May of 2011. John remained in Townsend fishing and RVing with his friends and family. In July 2013 John was introduced to the second love of his life, Barbara Hall. John and Barb put together a new and fulfilling life continuing to RV, fish and ride the 4-wheelers. Sadly, those happy years ended far too soon when cancer claimed John’s life. John was preceded in death by his parents, Grace and Sherman Smith and wife Emmy. He is survived by his partner Barbara; son and daughter-in-law Sherm (Andrea) Smith of Townsend; daughter and son-in-law, Judy (Todd) Noel of North Bend, Washington; sister Pat (Smith) Hall of Bozeman; 5 grandchildren and 8 great grandchildren. Services will he held at 2:00 pm, Saturday, February 8, 2020 at Faith Baptist Church, Townsend. Family requests memorials to the cancer foundation of your choice.

Montana Veterinarian, Sherman John Smith passed on February 3, 2020. John was born in Bozeman July 8, 1940 to Grace (Letz) Smith and Sherman B. Smith. John resided on the family farm near Bozeman with his parents and sister, Pat. He took part... View Obituary & Service Information

The family of Sherman John Smith created this Life Tributes page to make it easy to share your memories.

Send flowers to the Smith family.