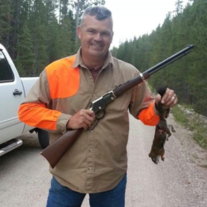 Shawn Allen Wigert, 50, passed away on July 14, 2019 at Fort Harrison VA Hospital after an extended illness.

Shawn was born in Missoula on November 18, 1968, to Gary and Janis (Greenup) Wigert, growing up in Anaconda, Montana.

Shawn graduated from Salt Lake Job Corp. in 1989 and then entered the Air Force. After serving for four years he began working at MSP until 1997 when he moved to Helena and married Michele (Bailly). Together they raised their two daughters, Brittney and Shelby.

Shawn rejoined the military in 1998 with the Montana Army National Guard serving two deployments (2003-2004) Iraq, and (2011-2012) Afghanistan, with the MP484. He earned many awards and medals including the Bronze Star while serving in Afghanistan. Shawn retired from the military after 23 years as a 1st Sergeant.

Shawn loved writing songs and playing them on his guitar with his brother Dan (many of which were R rated), watching his girls rodeo, boating, and camping. Growing up he had many great summer memories with time spent in Colstrip and Ashland.

He is preceded in death by his mother, Janis Wigert.

Memorials may be made to the organization of the donor’s choice.