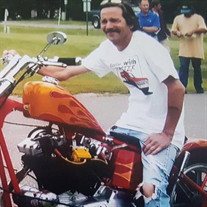 Samuel "Sam" Leopold Wood, a longtime resident of Helena, Montana passed away on July 7, 2019 at St. Peters hospital at the age of 66 from cirrhosis. He was born on November 21, 1953 in Lowell, Massachusetts to parents Albert and Lucie Wood. He was the eldest of 7. Sam enlisted into the US Army in Butte, Montana in 1976. He was trained at Fort Belvoir, Virginia where he was “disciplined, well-motivated, and an extremely productive squad leader". He married Kellie Rusek in 1977 and moved to Fort Lewis, Washington where his primary specialty was as a power generator and wheel vehicle mechanic. They decided to start a family a short time after, beginning with the birth of their son Samuel. He was later honorably discharged in 1979. They moved back to Helena, Montana and had their daughter Krystle. In 1989 Sam decided it was best to relocate to Auburn, Washington to raise his family. He continued to do what he enjoyed, working on cars. He did everything from autobody, mechanics, all the way to painting cars. Sam and Kellie divorced in 1997 after 20 years of marriage. Sam would enjoy taking family vacations, going to car shows, racing slot cars and riding his Harley Davidson. Sam retired in 2015 and moved back to the town he loved, Helena, Montana. Sam always liked to be on the go out meeting new people and visiting family and friends. His bright smile and laugh would evoke a lasting friendship with all he encountered. He always had his video recorder or camera, and loved taking pictures capturing every moment. Sam was a kind and loving man with a huge heart that would always help someone in need. Sam was preceded in death by his parents: Albert and Lucie, his sister Kathy, and his brother Al. He is survived by his son Sammy (Tiffany); daughter Krystle; sister Mary; brothers James, Joe and Bill; nieces and nephews; and grandchildren; Cozette, Cooper and Sophia. Sam was an organ donor and the gift of his corneas has been given to help restore vision to a blind recipient. Upon his wishes, his remains will be spread at the top of MacDonald Pass where he can be with his mother, sister and brother. May he rest in peace, until we meet again. We all love him and will miss him. A memorial gathering is scheduled from 1:00 p.m. - 3:00 p.m. Friday July, 12 at Big Sky Cremations in East Helena, Montana. In lieu of flowers donations can be made in Sam's name to Westmont, 2708 Bozeman Avenue, Helena, MT 59601.

Samuel "Sam" Leopold Wood, a longtime resident of Helena, Montana passed away on July 7, 2019 at St. Peters hospital at the age of 66 from cirrhosis. He was born on November 21, 1953 in Lowell, Massachusetts to parents Albert and Lucie Wood.... View Obituary & Service Information

The family of Samuel "Sam" Wood created this Life Tributes page to make it easy to share your memories.

Send flowers to the Wood family.