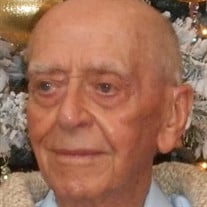 Roger Paxson Holmes, son of Joseph and Ella J. (Paxson) Holmes, and beloved husband, father, grandfather and great grandfather passed away February 23, 2019 in the early morning at his home in Helena, MT. Roger had three sisters, Ruth Holmes (deceased), Lena Belle (Holmes) Wilcox (deceased) and Althea Holmes. He graduated from Wayland Michigan High School in 1936. Roger came to Montana for a variety of job opportunities. He attended Western Montana College for one year before being inducted on May 3, 1942 into the U.S. Air Force. He was a member of the 397th Bomb Group, 597th Bomb Squadron and Ordinance Bomb Demolition Team. After the war, Roger returned to Montana. In 1946 he began working as the county manager for the U.S. Dept of Agriculture until October 1951, when he took the position of rural mail carrier with the U.S. Postal Service in Whitehall, MT. In 1971 he was promoted to the postmaster position. He retired July 31, 1974. On July 1, 1950, he married Edna Clare Duncan. They celebrated 68 years on July 1, 2018. Their children are Valinda Holmes of East Helena, MT and Sue (Holmes) Kirk (Jim) Kirk of Boise, ID. Roger is survived by his wife, Edna, and their daughters. Roger’s grandchildren are Sami (Kirk) Crockett (Jeremy) of Mountain Home, ID and Jamie (Kirk) Farley (Kyle) of Boise, ID. His great grandchildren are Brooklyn and Brayden Farley and Ruby Sue Crockett. Roger enjoyed the outdoors and spent many great time hunting, water skiing, boating and snowmobiling with family and friends. Roger also enjoyed traveling and spent much of his retirement traveling the world. In April 1951, Roger joined the Masonic Lodge – Mystic Tie Lodge #17 AF & AM and served as Worshipful Master in 1968. He was a member for over 50 years. At home he was a volunteer to his community and was a jack-of-all-trades. Roger requested no services to be held in his honor. Cremation has taken place under the direction of Big Sky Cremations. A private family gathering will take place later this summer. Memorials made in his honor may be sent to the Masonic Home of Montana, 2010 Masonic Road, Helena, MT 59602 or to the charity of the donor’s choice.

The family of Roger Holmes created this Life Tributes page to make it easy to share your memories.

Send flowers to the Holmes family.