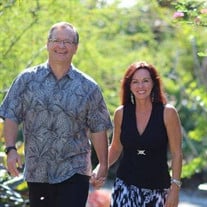 On the morning of December 10th, 2018 at 10:00 AM, after battling a very rare and aggressive brain cancer for almost 7 months, Paul &#8220;Psquared&#8221; Harold Holland, went home to be with Jesus, the One he loved and faithfully served as... View Obituary & Service Information

The family of Paul Holland created this Life Tributes page to make it easy to share your memories.

Send flowers to the Holland family.