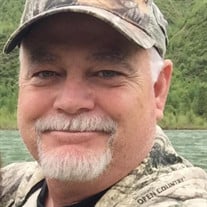 Larry “Oren” Metzger On the afternoon of October 11, 2021, Oren passed away at St Peter’s Hospital in Helena, MT, due to complications of COVID-19. At the time of his passing, he was surrounded by his loving family. Oren was 60 years young. Oren was born in El Paso, Texas, to Larry and Susan Metzger on May 19, 1961. He spent his early childhood in Germany and later attended schools in Glasgow, MT and North Carolina. Growing up, Oren spent summers with his beloved Grandpa George and his cousins down south. He graduated high school in North Carolina. He quickly followed his heart and returned to Montana, where he lived in Glasgow, Chinook, Great Falls & Helena. Oren was the ultimate salesman. He truly believed there was no such thing as a stranger. Whether in the line at the grocery store or sitting next to someone on an airplane, he took the motto from Marvin Schwan that you should treat everyone as if they might be your next best friend. He lived this philosophy as he journeyed through his 8 years at Blue Rock Beverage, 23 years with Schwan’s and Lawson Products for the last 7 years. Oren built relationships with every customer and never considered them to be just part of the job. In November of 1981, he met the love of his life at Stan’s Saloon in Glasgow. It was love at first sight. On the evening they met, Oren told his roommate that he had met the girl he was going to marry, and Kim went home and told her mom the same thing. A short 8 months later, on July 17, 1982, they were married. Oren and Kim spent almost 40 years together navigating this crazy adventure called life. Oren had a huge personality. When he walked into a room, he was immediately greeted with shouts of, “My man!”, “Brother, my brother!”, and “Orehead!” Every occasion was more boisterous and filled with infectious laughter when Oren was present. He was so full of life and everyone who met him immediately knew he was one of a kind. Oren and Kim were blessed with two amazing children, Amber and George, who filled their lives with immeasurable joy and purpose. With the birth of Kendall in 2000, the grandparenting chapter of life began. Over the next 17 years, Oren became “Papa” to five more grandchildren: Grant, Ethan, Everett, Joel and Kennadie. There has never been a Papa who adored and cherished his grandchildren more. Oren had a love and appreciation for all of God’s creation. He passed on his passion for the outdoors and sports from the generations before him to those after him. He spent all the time he could fishing, hunting, golfing, bowling, and more. When he wasn’t out enjoying those activities, he could be found telling animated stories about them. You could always count on him to step into the role of head chef and entertainer at “Metzger’s Bed & Breakfast/ Hunting Camp”. He loved America, the Constitution, and all those who fight to protect them. He cherished his family and would brag about them to no end. His days began with a pot of coffee and his bible. He was always ready to drop a dad joke or funny movie line. Music pumped through his veins and he would randomly sing you a line from whatever song was in his head, whether you asked for it or not. Now he’s singing in the presence of Jesus. Oren was preceded in death by his mother Susan, mother-in-law Sandi, brother Allen, maternal and paternal grandparents, and numerous aunts and uncles. Oren is survived by his beloved wife Kim, daughter Amber O’Rourke (Ryan), son George Metzger (Stephanie), father Larry Metzger, sister Francie Daniel, brother Erich Paul, grandsons Kendall Newton (Nicole), Grant, O’Rourke, Ethan O’Rourke, Everett Metzger, Joel Metzger, granddaughter Kennadie O’Rourke, father-in-law Tony Sundsted (Donna), sister-in-law Karna (Dennis), uncles Don Metzger (Jeanine), Lynn Metzger, nephew Nic Daniel, nieces Shawna Rowe (Marty), April Christian (Layman), Aunt Judy & Uncle Lee. His 13 year old loyal companion, Thunder the Wonder Dog. In lieu of flowers, memorials may be sent to Family Promise of Greater Helena or Disabled American Veterans. Special thanks to St. Peter’s Hospital for the exceptional care given in these uncertain times. We also appreciate the compassion and love shown by his nurses; Kailee (3rd floor), Rick and Karina (ICU). Thank you to Pastor Keith Johnson for his years of support and guidance. And a lifetime of thank you’s to all of Oren’s friends that he considered his brothers. Oren’s funeral will be held at 4:00 pm on Monday, October 18th, 2021, at Life Covenant Church in Helena, MT. A Celebration of Oren’s life will be held at Fox Ridge Golf Course following the funeral. If you are unable to attend the funeral, it will be live-streamed on Facebook on the Life Covenant Church, Helena, MT page.

Send flowers to the Metzger family.