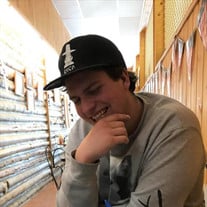 One of the most beautiful souls we will ever have the privilege to know, Kestin David Noel, blessed this world September 16, 1997. From the day he was born Kestin lived life on his own terms; to say he was stubborn is putting it mildly. He did what he wanted no matter what mom, dad, or anybody else, including the law, had to say. Kestin and his brother Derick were inseparable in childhood, mostly because as they ran off mom or dad would usually yell ‘stay together’, but having to stay together never slowed them down. Lots of adventurous trouble was gotten into, they were always good at making mama worry. Kestin lived in the moment; if the thought entered his head there was no second guessing the action, it was done. He loved anything outdoors, from skateboarding to camping and everything in between, he was however never one to turn down a spot on the couch for a video game, good book, or nap. Smiling always came easy to Kestin, and that smile was irresistible, albeit sometimes infuriating, irresistible none the less. No matter what situation he was in, good or bad, that boy was smiling. Along with his smile was his infectious giggle/laugh, there isn’t a word created that can truly describe that sound he made and how infectious it was to those around him. If he was giggle/laughing near you, eventually you couldn’t help but laugh too, no matter what mood you were in. Kestin worked at Steve’s Café in Helena for many years, he loved the personal interaction he was able to have with the customers and friendships he developed with his coworkers. The owners, Steve and Penny, were very dear to him and he always spoke fondly of them. Kestin also had a deep respect for their son, Steve, who took over the business later on. The first few months of this year Kestin worked for LaPa Grill, and again he enjoyed the feel of working for a small town restaurant and he loved the atmosphere. Even though his time there was short he grew quite fond of the people and the burritos pretty quickly. Kestin loved all forms of art and he found true happiness creating his own. There wasn’t a blank spot of any paper, piece of wood, concrete, coffee table, pant leg, skin or whatever else was available that was safe from his pen. As a self-taught chef, Kestin was always quick to point out the “correct” way to cook anything, including boiling water. Even if you stopped what you were doing and started cooking his way it was the wrong way, he really just wanted you to move over so he could do it himself. Kestin is survived by his mother and father, Heather Noel and Bill Longacre; brothers Derick and Brogan; and sister Violet. Grandparents, Mary Ann Noel; Roger Knapstad; Clara Capps; and Sherman Thornton. Aunts and Uncles, Dustin and DeAnna Noel; Lon and Bridgette Shepherd. Cousins, Davin and Delia; Ashleigh (Brandon), Jordan (Sydney), Aleks, Cody, Travis, and Mikayla; best friend, whom he loved his entire life, Brook Bennett; girlfriend Morgan Moe; countless other family members and a sh*tload of great friends. Kestin was not perfect and in true human nature he made many mistakes, but the positive impacts he made in the short time he was here will never be forgotten. Kestin was big, goofy, hardheaded and generous; and he is loved and deeply missed. ~Sorry it took so long to write this my son, mama was broken for a minute and needed to relive the memories before I was strong enough to write these words. Those memories will make me cry sometimes but that’s ok because mostly they are going to be relived with a smile, thank you for all of them. Love you always, Mom~ Because traditional services would not be appropriate for this unique young man his family is planning a proper party at a later date. Kestin loved all animals, in lieu of flowers memorials are welcome to Lewis & Clark Humane Society.

One of the most beautiful souls we will ever have the privilege to know, Kestin David Noel, blessed this world September 16, 1997. From the day he was born Kestin lived life on his own terms; to say he was stubborn is putting it mildly. He... View Obituary & Service Information

The family of Kestin Noel created this Life Tributes page to make it easy to share your memories.

One of the most beautiful souls we will ever have the privilege...

Send flowers to the Noel family.