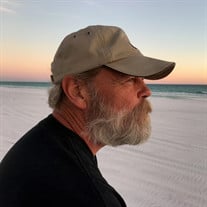 Keith Wayne Twingley, 60, passed away from natural causes on August 29, 2019. Keith was born in Garrison, ND to Harland K. Twingley and Mildred E. Twingley. Keith shared his life with two sisters, Gerry, 8 years older, and Kim, 7 years younger. Early childhood squabbles grew into deep love for each other and they had a bond that was envied by many. Keith grew up in Coleharbor and later Bismarck, ND. There he attended most of his elementary and high school years. He moved with his parents and Kim to Missoula, MT in 1981 and helped his dad build the log home where they lived. When his father passed away in 1982, he remained there with his mother and sister and became man-of-the-house. His early years working side by side with his contractor father taught him skills he used for the rest of his life. In 1987 he met Janice Howard and after a 14-year engagement, they tied the knot on January 17, 2001 in Coeur d’Alene, Idaho. Over the next 14 years they enjoyed camping, backyard barbecues and the many hosted holiday dinners for friends. Janice’s passing in May of 2015 opened the next chapter in Keith’s life. After working 30+ years at Big Sky Amusement Games, Keith decided it was time to move on, sell his house and purchase a sailboat in Georgia. He continued to spend the next 3 winters sailing south along the Florida coast, a dream finally fulfilled. There he met special new friends and shared so many fun times “living the life”. Summers were spent back in Montana, sailing with his best friend Buck at Flathead Lake, evening get-togethers with his fellow sailors at Big Arm, riding his newly acquired Harley, teaching himself to weld, flying his drone and barbecuing for family. Keith was a self-taught man, a jack-of-all-trades and a perfectionist. Always there for family and always smiling with his twinkling eyes. Keith is survived by his mother, Mildred Twingley of Helena, sister, Gerry Hanson and husband Dave; sister Kim Garrity and husband Devin and son Cole, all of Helena; “First Mate” Buck King of Missoula and family and friends, new and old, near and far. Keith was preceded in death by his wife, Janice Howard; his father, Harland “Tiny” Twingley; both sets of grandparents; and his pets, Mandy, Tucker and Dutch.

The family of Keith Twingley created this Life Tributes page to make it easy to share your memories.

Keith Wayne Twingley, 60, passed away from natural causes on...

Send flowers to the Twingley family.