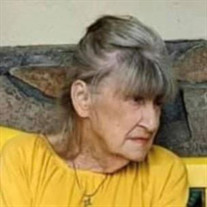 Josephine(Josie) Helen McPhee passed away on Saturday, October 9, 2021 at St. Peter’s Hospital in Helena, Montana due to complications of Covid 19. Josie was born on January 12, 1937 to Pat and Helen Ziegler of Helena, Montana. She spent her childhood in Helena where she attended Helena schools. Her first marriage was in 1957 to William Norris. Together they had 4 children. In 1970, she met and married her soul mate, Richard LaRoy McPhee. Together they had one child. They remained happily married until his passing on June 4, 2015. In 1977, Josie began a career with Rocky Mountain Development Council working with the elderly. She served in the dinner club and with the meals on wheels program. She retired in 1991. Josie enjoyed spending time with her family and often hosted family dinners. She loved cooking, gardening, dancing, and singing karaoke with her daughter, Debbie. She had an incredible sense of humor and was generous and genuine with the unconditional love she gave to her family. Words cannot describe how greatly she will be missed. Josie is survived by her son, William Ziegler, daughters, Tammy Orr, Jodi Raue (Matt), and Spring Thomas( Paul); her step children, Rita Galbavy(Dennis) and Rachelle McPhee; her son in law, Russell Hauck, and many grandchildren,nieces,and nephews. Josie is preceded in death by her husband, Richard McPhee, daughter, Debbie Hauck, stepsons, Rick McPhee and Ronald McPhee, and son in law, Tedd Orr. A celebration of life will be held in the Summer of 2022.

Josephine(Josie) Helen McPhee passed away on Saturday, October 9, 2021 at St. Peter&#8217;s Hospital in Helena, Montana due to complications of Covid 19. Josie was born on January 12, 1937 to Pat and Helen Ziegler of Helena, Montana. She spent... View Obituary & Service Information

Send flowers to the McPhee family.