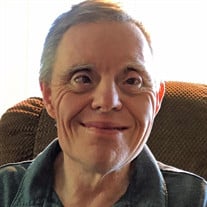 John Kirley, 56, died of complications from Alzheimer’s Disease on November 25, 2020. John was born in 1963 to Floyd and Fern Kirley in Townsend, Montana. His father died before John was two years old. His sisters, Patricia Kirley Lusetti and Mary Kirley Clow, were about 20 years older than him, so he grew up with just his mom and brother, Bill Kirley, at home. When he reached school age, he lived with foster families in Helena so that he could attend special education classes there. He returned home to his family in Townsend each weekend and every summer. After John had lived with a number of different families, John’s teacher and his wife took John in to give him a more stable setting. He lived with them for 37 years. He called Jim and Susan McGrane his parents, and Kim McGrane Beaver and E.J. “Eddy” McGrane were his sister and brother. John was a West Mont client for over 30 years. Through West Mont’s supported employment program, John worked at Burger King for 21 years. Everyone should hope to have a boss as fun, patient, and supportive as Jeremy was for John. There are so many others who were also kind and generous to John, whether bringing him souvenir hatpins from their travels, letting John have their pens (knowingly or unknowingly), or just letting John tell them he was good at something – singing, for example. The congregations at Holy Cross in Townsend and Our Lady of the Valley in Helena can attest that he tried valiantly to sing like his favorite Italian tenor, whom he called Pottiwotti. The way John said your name the first time was what he was going to call you for good, and it was not going to change. Isn’t that right, Tyer James? John was always wanting to “go somewhere.” Outings with Jim and Susan were always fun, even if he couldn’t stay awake in the car. Staying in a hotel was great, and a cruise was even better. His favorite place to go was California, where his sister Pat and brother-in-law Vance live. There, he and Bill could go for walks on the beach to look for seashells and go swimming in the pool, even in winter. Wherever he went, he loved to take a camera or three. But you couldn’t go anywhere if it was time for Lawrence Welk or WWE. John loved interacting with people. Father Shea summed it up when joked, “if only he could overcome his shyness.” Many will miss John’s wonderful, infectious, and sincere smile. John’s mother moved to Helena to live with son Bill in 2003, and she was able to take care of John on weekends, when he wasn’t at the McGranes’, until her death at age 99. John then continued to live with Bill until Alzheimer’s required him to move to a West Mont group home, where he received very compassionate care until his death. John was preceded in death by his parents and his sister, Mary Clow (Jim), of Edmond, OK. He is survived by his brother, Bill Kirley, of Helena, his sister and brother-in-law, Patricia and Vance Lusetti, of Oceanside, California, and the Jim and Susan McGrane family of Helena. A memorial service will be held at a later date. Memorial donations may be made to West Mont, 2708 Bozeman Ave., Helena, MT 59601 or at www.westmonthelena.com. Please visit www.helenafunerals.com to share memories of John.

John Kirley, 56, died of complications from Alzheimer&#8217;s Disease on November 25, 2020. John was born in 1963 to Floyd and Fern Kirley in Townsend, Montana. His father died before John was two years old. His sisters, Patricia Kirley Lusetti... View Obituary & Service Information

The family of John Kirley created this Life Tributes page to make it easy to share your memories.

Send flowers to the Kirley family.