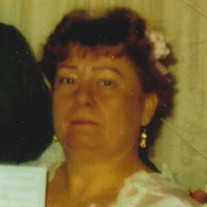 Joan Marcum Sanchez Crabtree left this world on March 28, 2020. She left this world to begin a new life with her Father in Heaven. Joan was 79. Joan was born March 25, 1941 in Seattle, Washington. On March 5, 1957, Joan married Antonio G. Sanchez. They had 5 wonderful children and were later divorced. Joan married her current husband Clent Alan Crabtree, March 9, 1991. Joan was a member of the Church of Jesus Christ of Latter Day Saints Helena 2nd Ward. In 1995 Joan was life flighted from St. Peter’s to Missoula for brain surgery. When she came out of a coma she had to learn to walk and talk again. The talking was easier than the walking. If you knew Joan, she was always willing to “give you a piece of her mind,” no matter what it was. It was wonderful to be her primary caregiver and her husband. Joan is preceded in death by her mother and father, brother and sister, and son Mark Henry Sanchez. Joan is survived by her husband, Clent Alan Crabtree of 29 years; daughters, Toni Schermerhorn of Helena, René Sanchez of Butte, Tammy Saylor of Helena, Dana Kennedy of Seattle and many grandchildren and great grandchildren. Our cat Sandler will also miss Joan. He spent many nights on the bed guarding her. A thank you to Brenda Tubbs and all of her nurses, aides and staff at St. Peter’s Hospice, you all are wonderful. Thank you to all the doctors and nurses of St. Peter’s Health and Medical Groups. Also, a thank you to Dr. Joel Maes of Southhills Dental and Dr. Jason E. Smith of Elkhorn Foot and Ankle. And a real heartfelt thank you to Dr. Dwight Heisterman, I am so grateful that you came walking down the hall and told us if we can get Joan stable she could be life flighted to Missoula. This was just an hour or two after the ER doctor said, “There is nothing that could be done, get her family together and start making the arrangements.” Four months later you were her primary care provider. She always loved pointing her finger at you shaking it and saying something just to get a reaction out of you. Because of all of you Joan can now enjoy “Her mansion just over the hill top in that bright land where she will never grow old.” Thank you to Northwest Home Care, particularly Donna Z., Eurce, Jordan and Shasta. Thank you to Bridger Vet. Anyone who knew Joan, we love you all! Thank you all for all your kindness.

Joan Marcum Sanchez Crabtree left this world on March 28, 2020. She left this world to begin a new life with her Father in Heaven. Joan was 79. Joan was born March 25, 1941 in Seattle, Washington. On March 5, 1957, Joan married Antonio G. Sanchez.... View Obituary & Service Information

The family of Joan Crabtree created this Life Tributes page to make it easy to share your memories.

Send flowers to the Crabtree family.