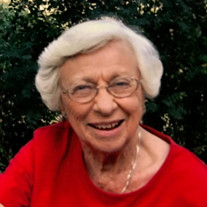 OBITUARY Jean F. McGrath, editor of the Butte Heritage Cookbook, passed away April 13, 2019, in Helena after several years struggling with dementia. She was 98. Jean was born in Knob Noster, Missouri on August 25, 1920, to Ethel and Ben Funk and raised in rural Missouri along with three brothers. After graduation from Central Missouri State College, Jean married John McGrath during World War II, before he was shipped overseas by the U.S. Air Force. Jean and John eventually settled in Butte, Montana where they raised two children, Mike and Kathleen. She taught school over the years in Butte, primarily at St. Ann’s Grade School. Jean and John were avid fly-fishing enthusiasts and golfers. She loved to cook and was always eager to try out new recipes on family and friends. They moved to Mesa, AZ in 1983 when John retired but returned to Montana for several summers to fish their favorite streams. For many years she served as a volunteer librarian in Mesa and became a big fan of the Phoenix Suns and the Arizona Diamondbacks. In 1976, as a project for the Silver Bow Bicentennial Arts Commission, she edited the Butte Heritage Cookbook. Now in its eleventh printing, the Cookbook contains 290 pages of unique recipes and stories featuring the cultural heritage and food of the many ethnic nationalities that settled in Butte. She interviewed dozens of Butte cooks to gather their favorite family recipes, many came with fascinating stories and histories. She personally made virtually all the recipes before putting them in the book. All proceeds from the sale of the book have gone to the Butte Arts Council for the purchase and maintenance of the Butte Arts Chateau in Uptown Butte. It is still widely available throughout Montana. Jean was especially proud that she had been born on the day that women got the right to vote. Jean had a lifetime commitment to education, particularly for women. She was a lifetime member of the American Association of University Women, P.E.O. and the Homer Club in Butte. Jean and her family appreciated the care and support she received the last three years at Rosetta Assisted Living in Helena. Jean was preceded in death by her husband John in 1990. She is survived by her children, Mike McGrath (Joy) of Helena and Kathleen Vasquez (Henry) of Gulfport, Mississippi, grandsons Pat, Chris, Hal and Sam and their families as well as several nieces and nephews. Private services will be held on a later date. Memorial donations are suggested to the McLaughlin Center for Alzheimer’s Research, 1520 23rd St. So., Great Falls, MT 59405 or online at mclaughlinresearch.org.

OBITUARY Jean F. McGrath, editor of the Butte Heritage Cookbook, passed away April 13, 2019, in Helena after several years struggling with dementia. She was 98. Jean was born in Knob Noster, Missouri on August 25, 1920, to Ethel and Ben Funk... View Obituary & Service Information

The family of Jean McGrath created this Life Tributes page to make it easy to share your memories.

Send flowers to the McGrath family.