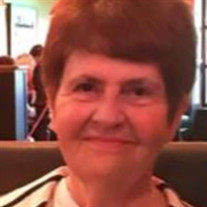 Janet Merritt Lamping, 73, passed away from heart failure at home, on Thursday, May 7, 2020. Janet was born in Helena MT on May 31, 1946 to Earl and Clella Merritt. She was the youngest sibling of three, joining her brother Jay and sister Judy. She grew up in the Helena Valley and resided in the area all her life. She attended school in Helena, graduating from Helena High School in 1964. In 1968 she married Rick Lamping of East Helena. They welcomed their first child, Wade, in 1969 followed by their second child, Melissa, in 1972. Janet held a few different jobs throughout her career. She worked as a House Parent at Mountain View Girls Home where she was instrumental in helping many troubled girls, a job she thoroughly enjoyed. She then worked a short time at Shodair Hospital when it was on Helena Avenue, mentoring many youth suffering from addictions. Later in life she switched career paths and became a certified optician, working at Shopko Optical and Helena Vision Center. Due to declining health she retired. Janet and Rick eventually divorced but remained good friends, spending holidays together with their kids and even taking an occasional road trip together. Janet is survived by her brother, Jay (Sharon) Merritt and sister, Judy Johnson of Helena; her ex-husband Rick Lamping; her son Wade (Jen) Lamping and their kids Connor, Milo and Asher; and her daughter Melissa (Todd) Miller and their kids Merritt, Madi, Rhees, Hayden and Beth, also of Helena. She is preceded in death by her parents Earl and Clella Merritt, brother-in-law Bob Johnson, and numerous aunts and uncles. At Janet’s request there will be no service. Cremation has taken place. Her ashes will be placed next to her family at the Hardgrove Merritt Cemetery in the Helena Valley. Donations can be made in her name to Compassus Living Foundation, in honor of the compassionate care she received from Compassus Hospice of Helena, during her final days.

Janet Merritt Lamping, 73, passed away from heart failure at home, on Thursday, May 7, 2020. Janet was born in Helena MT on May 31, 1946 to Earl and Clella Merritt. She was the youngest sibling of three, joining her brother Jay and sister... View Obituary & Service Information

The family of Janet Lamping created this Life Tributes page to make it easy to share your memories.

Janet Merritt Lamping, 73, passed away from heart failure at...

Send flowers to the Lamping family.