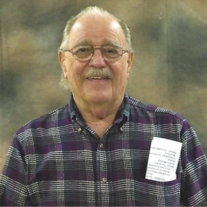 Harvey C. Tice, of Birmingham, Alabama, passed away in his Grandson’s home in Helena, Montana on July 12, 2019 after a beautiful long life surrounded by those who loved and cared for him. He was 100 yrs., 6 months and 12 days old, Harvey’s favorite pass times was keeping track of the days and his age.

Harvey was born and raised on a farm in Clearlake, Iowa on February 6, 1919. After graduating High School, he continued on to receive a degree in Aviation/Aerospace, from ATP Flight School, Minneapolis, MN.

Harvey married Ethel Tice on February 6, 1943; they were married 47 years.

Harvey was very proud of his military service and was a WWII Veteran. After his time in the service Harvey worked for an Aircraft Company in San Diego, CA, from 1941-1962 and then continued his career at Hayes Aircraft in Birmingham where he worked from 1962 –1989, retiring after 27 years of service. Harvey was a member of the Roebuck Christian Church, Birmingham, AL and a member of the Freemason Unity Lodge No. 632 since 1949 and in his free time he enjoyed collecting and selling vintage items at the flea markets.

Harvey’s family wishes to thank some wonderful friends who enriched his life with their friendship; Anita Edwards, Fred and Sue Smith, Stan Washer. “Friendship isn’t about whom you have known the longest. It’s about who came and never left your side. Harvey was blessed to have known all of you.

In lieu of flowers memorial donations may be given to Shriners Hospitals for Children (https://donate.lovetotherescue.org) or Unity Lodge, No. 632, 3366 Adams Ave., San Diego CA 92116