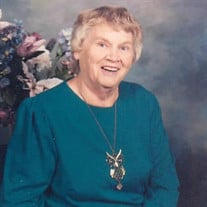 Geraldine “Gerry” Mae Knight was born August 14, 1929 in Midby, Montana to Doris and Avery Knight. She spent her childhood and early adult life in Redstone. She started school shortly after turning five, graduated from Redstone High School at age 16 and signed her first teaching contract that summer. She taught at rural one-room schools, boarding with local families or living in the corner of the schoolroom. On December 27, 1948, Gerry married Lawrence “Penny” Bantz. For several years, Gerry helped with the farm and the family dairy business. Later she resumed her teaching career in Redstone and then in Outlook. She attended many summer college sessions over the years and finally completed her BA in Education in 1969. Afer 30 plus years of teaching, Gerry retired in 1986. Gerry was a born leader and organizer. She was involved in a multitude of community projects and served in leadership positions in several organizations, including the Methodist Church Women and Delta Kappa Gamma. After Penny’s death in 199S, Gerry moved to East Helena to be near her children and their families. She immediately became involved with the Methodist Women, Friendship Force, Fortnightly Book Club, Delta Kappa Gamma, Retired Teachers and several bridge clubs. Her travels with Friendship Force took her to Germany, Australia, the Holy Land and several destinations within the United States. She also loved hosting reciprocal visits from those clubs. Gerry was preceded in death by her parents, her brother Jim, sister lyone, her husband Penny, son Larry, son-in-law Tim West and grandson Patrick West. She is survived by her daughter Mary Jane West; daughter-in-law Wendy Bantz; granddaughters Yvette\Lee) Keller, Tina West, Melissa West, and Bronte Bantz; grandsons Justin Bantz, Kevin (Dayna) West, &son Bantz, Aaron West and Tyler Bantz; and several greatgrandchildren. Due to the COVID complications, private family services will be held on Friday, July 3, 2020 at the East Helena United Methodist Church with interment to follow at a later date in Outlook, Montana. The service will be livestreamed to East Helena United Methodist Church Facebook page. To offer condolences to the family, please visit helenafunerals.com

The family of Geraldine Bantz created this Life Tributes page to make it easy to share your memories.

Send flowers to the Bantz family.