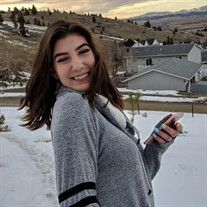 Erika was born June 3, 2002 in Edmonds Washington to Nena Susanne and Dale Roland Kruger. No one was more excited when she joined our family that her big brother, Karl. He watched over her and cared for her like that of a first-time parent. Erika attended grade school in Snohomish Washington before moving to Helena Montana in the middle of her fourth grade. Erika attended Broadwater Elementary, CR Anderson Middle School and Capital Highschool before completing her HiSet and enrolling in Helena College. Erika was fortunate to travel often in her 16 years of life. She learned to walk while visiting relatives in Germany. She vacationed in Hawaii, Canada and Mexico. She enjoyed visiting relatives while vacationing in Iceland, Denmark, Holland, Germany, Switzerland, Italy, France, Austria and Czechoslovakia. Her favorite city was Berlin where she and her mother explored all the places her mother had been while attending Highschool there. Erika was an accomplished flautist, certified scuba diver (by the age of 10), enjoyed riding motorcycles, horses, snowmobiles, ATVs, skiing and snowboarding. Many of these activities she learned from her brother. She began riding her ATV when she was only 3 and would simply go up and down the driveway until she ran out of gas. Erika was a kind and gentle soul with a very playful spirit. She loved animals, nature (as long as there were no bugs), and spending time in or near the water. She was full of life and wanted those around her to enjoy life. She tried very hard to help those with whom she was the closest. She was taken from this earth much too soon, yet she spent her last hours with her big brother. She would have wanted it that way. Erika is survived by her brother Karl Wilhelm Kruger of Helena, her mother of Helena, her father of Garrison, her Grandmother Henriette Perkins of Snohomish Washington, her Aunt Lela Perkins of Everett, Washington, , her Aunt Rosemary Raynaud of Everett Washington, her Uncle Karl Kruger of East Helena, her Aunt Dena Baldini and Uncle Joe Baldini of California, her Great Aunt Henriette and Great Uncle Wilhelm Therling, four cousins, Auntie Deb of Arizona and her Best Friend Forever Dymond Cummins. Erika will forever be remembered as an intelligent, strong, remarkable and beautiful young woman. Her wonderful sense of humor, bright smile and sparkling eyes will be missed by all who knew her.

Erika was born June 3, 2002 in Edmonds Washington to Nena Susanne and Dale Roland Kruger. No one was more excited when she joined our family that her big brother, Karl. He watched over her and cared for her like that of a first-time parent.... View Obituary & Service Information

The family of Erika Kruger created this Life Tributes page to make it easy to share your memories.

Erika was born June 3, 2002 in Edmonds Washington to Nena Susanne...

Send flowers to the Kruger family.