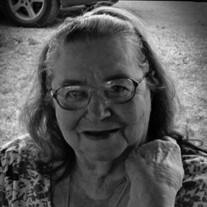 Elaine Joy Johnson February 27, 1934-February 24, 2020 Joy passed peacefully in her Helena home surrounded by loved ones on Monday, February 24, 2020. Elaine “Joy” Johnson was born on February 27, 1934 in White Sulphur Springs, Montana. She was the second child and oldest daughter of Dan and Dorothy Finn. She was an active child that loved to play basketball and spend time in the countryside with her family and friends. While living in White Sulphur, Joy met Donald Johnson, and the two married on October 21, 1954 in Helena, Montana. They made their home in White Sulphur and began to grow their family, first with Donald Wayne and Vicki Lynn, both born in Townsend and followed by Peggy Elaine and Patsy Rose born in town. They then moved to Helena and completed their family with the birth of their fifth and final child, Shane Elliott. Joy worked at the movie theater in White Sulphur as well as the bank before joining the family business at the local laundromat. After moving to Helena, she helped her husband Don build his business before joining the team at Hennessy’s and then Dillard’s as a cashier in the men’s department. She spent almost 30 years with the company, frequently receiving the honor of top sales, before she was forced to retire after having a stroke. However, her true passion lay in spending time with her grandchildren and great grandchildren. She loved to tell stories just like her father, both of her past as well as of her pride in her descendants. Joy, along with her husband Don were devoted members of the Jehovah Witness faith, creating a small congregation in White Sulphur Springs in the early 1960s and then continuing with their family in faith at Kingdom Hall after moving to Helena. She will be greatly missed by her brothers and sisters of the congregation. Joy is survived by her brother Jerry Finn of Billings, Dan “Buzz” Finn of Big Timber, and sister, Marjorie Simonds of Marshfield, Wisconsin; sister-in-law Janelle Smith of White Sulphur Springs; children Peggy Johnson of Helena, Patsy LaBrec of Beaumont, Texas, and Shane Johnson of Helena; daughter-in-law, Laurie Johnson of White Sulphur Springs; 13 grandchildren, including Tiffany Sweeney, Jamie Swigart, Jesse (Cheryl) Swigart, Jenifer Swigart, Josh Swigart, Skylar Johnson, Marisa Johnson, Jerac Johnson, Briana (Terry) Cross, Katrina Swanton, Phoenix LaBrec, Dillon Johnson, and Dara Johnson; 11 great grandchildren; and a multitude of nieces and nephews. She is preceded in death by her parents, Dan and Dorothy Finn; sisters, Kathleen “Kitsie” Finn Rossland and Vivian Finn Reynolds, two children, Wayne and Vicki Johnson; and her husband of 53 years, Donald Johnson. A memorial service is planned for 2:30 p.m. on Saturday, March 7 at the Kingdom Hall (1018 Cole Avenue) in Helena immediately followed by a reception. Burial at Forest Vale Cemetery will be determined at a later date. Memorials may be donated in lieu of flowers to the American Foundation for Suicide Prevention, c/o Central Montana Out of the Darkness Walk, PO Box 3393, Great Falls, MT 59403.

The family of Elaine Johnson created this Life Tributes page to make it easy to share your memories.

Send flowers to the Johnson family.