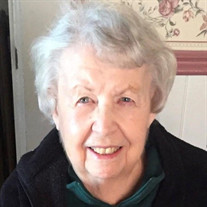 Eileen Alfrida Reiman went to meet her Savior face to face early Saturday morning, March 7, 2020 at Beehive Homes of Helena in Helena, MT. She was 92 years old. She had been a resident at Beehive Homes since February of 2019. Eileen was born on May 22, 1927, at St. Peters Hospital in Helena, MT to Ivan and Mary Martinson. She grew up in Helena where she attended Central School and graduated from Helena High School. She subsequently attended Seattle Pacific College in Seattle, WA where she began dating the love of her life, Robert Reiman. She had originally met Bob in Spokane while attending a youth conference at the Evangelical Covenant Church in 1944. Music brought Bob and Eileen together when Bob asked Eileen to accompany him as he sang. So began a beautiful musical partnership that would last more than 60 years. After graduating together in 1951 they were married in the old Evangelical Covenant Church at the corner of Butte and Hoback in Helena on Aug. 25, 1951. They eventually settled in San Jose, CA where Bob practiced as a Physical Therapist. They lived in San Jose for ten years, and it was there that both of their children were born. In 1961 they decided to move their family back to Eileen’s hometown of Helena, MT where they would remain for the rest of their 64 years together. Bob and Eileen were actively involved in their church community throughout their married life and played organ and piano together for church services and other gatherings for many years including, periodically, at Hunters Pointe, where they lived for four years, and other retirement homes and assisted living facilities in the Helena area. Their love of worshiping the Lord through music is a wonderful heritage they have passed down to their children and grandchildren. Eileen was a wonderful cook and hostess and enjoyed entertaining in their home in the early years of their marriage. Mom was a dynamic personality – fun, engaging, and truly was “the life of the party”. In June of 1975 Eileen suffered a cerebral hemorrhage that nearly took her from us. She was in a coma for two days and in the hospital for a month. As a result, she lost over half of her eyesight and much of her ability to smell and taste food. It was the kind of debilitating event that would have devastated many people, but Mom took it in stride and was thankful for every day that the Lord gave her. She recovered quickly, and while she dealt with the effects of the cerebral hemorrhage every day from that time forward, she never let it get her down or stop her from doing the things she really wanted to do. She and Dad had many more happy years together after that. Then, in April of 2015, Bob suffered a stroke and the Lord took him home in September of that year. Before Bob’s passing he and Eileen were able to celebrate their 64th wedding anniversary. Mom was heartbroken after Dad left her and has been anxiously waiting to be reunited with him ever since. On Saturday morning her wishes were finally fulfilled. Eileen is survived by her children Linnea (Rick) Todd of Loveland, CO, and Ron (Sue) Reiman of Helena, as well as 7 grandchildren (Don, Darlene, Dan, Jill, Meagan, Stephanie, and Cole) and 8 great grandchildren (Jonathan, Emma, Josiah, Lucas, Allison, Anna, Lauren, and Andrew). Mom was emphatic about not wanting a formal memorial service, but a graveside service for family members and friends will be held on Friday, March 13th in the pavilion at the Veterans' Cemetery at Fort Harrison in Helena.

Eileen Alfrida Reiman went to meet her Savior face to face early Saturday morning, March 7, 2020 at Beehive Homes of Helena in Helena, MT. She was 92 years old. She had been a resident at Beehive Homes since February of 2019. Eileen was born... View Obituary & Service Information

The family of Eileen A. Reiman created this Life Tributes page to make it easy to share your memories.

Send flowers to the Reiman family.