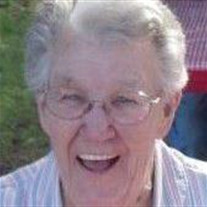 Doris Amanda (Lystad) Drake, 92, loving wife, mother, sister, aunt, grandmother and great grandmother, passed away on January 30, 2019 at home where she loved to be. Doris was born on August 11, 1926 in Peerless, Montana to William Walter Lystad and Bertha Amanda Berg. She had three brothers and one sister. Doris was so smart she skipped a grade in school and graduated from high school at 16 years of age as the Valedictorian. She attended one year of college at Northern Montana College in Havre, Montana. Doris soon met the love of her life, William George Drake, on a ranch in Scobey, Montana. At eighteen years of age, they married on January 22, 1945, just as Bill went into the Marines to fight in WWII. Bill and Doris raised a family of eight children, numerous grandchildren and great grandchildren. Their marriage was a happy one which lasted 64 great years until November 21, 2009, when Bill passed away. Doris was a stay at home Mom who worked on farms and ranches throughout her life. She was known to drive tractors, ride horses, chase cows, raise and butcher chickens, and other daily tasks on the farm. She sold milk, eggs and worms for extra money. We called it the Tilly Fund after our cow. Once the Tilly Fund had enough money, Bill and Doris took whichever kids were at home out to a real restaurant for dinner. Doris worked as an East Helena school bus driver for years and worked 20 years at the State Nursery in Helena, Montana. Doris and Bill were crafty in their retired years, which she enjoyed. She could sew, crotchet, paint, chop wood, win nail driving competitions, toss bales of hay, sheer sheep, and plant and harvest vegetables. She had a good sense of humor, liked peppermint schnapps and was a member of the Good Sam Camping club. Doris is survived by all eight of her children, Alice Realing (Howard), Clark (Marie-deceased), Larry (Susan), David (Penny), Richard (Lorrie), Diane, Bob (RoseAnn), and Susan (Dale) Doane. She is also survived by numerous grandchildren, great grandchildren, her niece Bonnie Lystad Hall, her great nephew Mitch Hall, Ray’s wife Ella Lystad, Brittney Lystad, Ryan (Kaitlin) Lystad, her nephew Don (Diane) Lystad, Kristen Lystad, Megan Lystad Anderson, Erik Lystad and surrogate sister, Delores Hart. Doris was preceded in death by her precious husband, Bill, her father, William, mother Bertha, sister Alice, her brothers, Marvin, Melvin (Bud) and Maynard, her nephews Raymond & Ralph Lystad, her great niece, Neysa, her nephew Joe Lystad, her daughter-in-law, Marie Drake, and grandson, Scott Garrison. Doris lost her mom on December 15, 1929. She and her brothers and sister were farmed out to family members in Minnesota until her Dad could bring them home to Montana to stay. Doris grew up without a Mom during hard times including the great depression. At 11 years old, her sister, Alice, was in effect, a mother to Doris and Bud. With help from the community, Doris grew up to be the strong, determined and independent woman we all knew and loved. Doris was the glue which kept her family together no matter the circumstances. She was tough, strong, stubborn, the disciplinarian, comforter and, you know the saying, “You’re a good cook Doris” it was coined for her. Most of all, she was a loving wife, mother, grandmother and friend. Doris was a good woman who loved Charlie Pride’s music. She and Bill met Charlie Pride at the local Lakeside Bar, and she also saw Charlie Pride live many times at the Host Fest in North Dakota. It was good she enjoyed music because she and Bill would cut the rug every chance they got. Man could they dance! In Eastern Montana, they would take a horse and sled with hay bales as seats for Doris and the kids. One time the sled hit a bump and Doris flew off. The snow was so deep, Bill brought the sled around so Doris could run and jump on. They would go to the community center and dance the night away. Doris loved spring when the trees are blooming, sun is shining and the grass is green. So to honor her love of spring and keeping with Drake family’s love of picnics, a celebration of life barbeque and pot luck will be held at her home at 5733 Drake Road, East Helena, Montana, on Saturday, May 11, 2019, at 2:00 p.m.

Doris Amanda (Lystad) Drake, 92, loving wife, mother, sister, aunt, grandmother and great grandmother, passed away on January 30, 2019 at home where she loved to be. Doris was born on August 11, 1926 in Peerless, Montana to William Walter Lystad... View Obituary & Service Information

The family of Doris Drake created this Life Tributes page to make it easy to share your memories.

Send flowers to the Drake family.