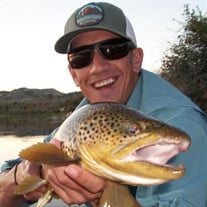 On Monday morning, August 17, 2020, Dillon Holmes left this earth as the heavens opened up and welcomed the most beautiful man of all time. Known to many as “the Dill”, he was born in Monterey, CA on September 4, 1982. He embraced a passionate life with a fearless sense of humor. He was an original Montana character who cherished his origins, the Monterey Peninsula. At an early age Dillon was drawn to music, fishing and his family. Family members as well as friends, old and new, enjoyed his company. An adventurer at heart, he traveled the United States, Europe, and Mexico with his mother, Bridgette Mazurek, and his cousins. He loved Montana, Monterey, and Barcelona, Spain. Above all he was a father to his precious son, Trizten King Jessie James Mazurek, age 2. In 2017 he met Katherine Cora Burgess and fell in love. Knowing his desire for a family of his own, Dillon and Katherine became the proud parents the love of his life, Baby Trizten. He attended Helena elementary schools, Central and HMS, and graduated from Helena High in 2001. He studied at Helena College and the University of Montana at Dillon. Dillon was known for his exceptional cooking skills and worked at “On Broadway” as a chef for over 12 years. He was an amazingly talented Carpenter and worked side-by-side with his father, David Mazurek, building and remodeling homes in Helena and Monterey. One of his fondest memories was working on the home of Ducky and Denise O'Toole in Carmel, CA. He also remodeled and repainted the entire Mazurek mansion at 702 Madison, Helena. Dillon loved water. His skills at fishing and floating many Montana Rivers were unparalleled. He often thought of himself as “Paul” or Brad Pitt from the “River Runs Through It”. He was a fierce San Francisco 49er's fan and Michael Jordan was his sport's hero #23. Dillon won over everyone he met with his infectious smile. Passionate about Rock & Roll, he lived to attend concerts, listen to, and write music. Dillon has a playlist that ranges from Led Zeppelin, to Sinatra, to Willie Nelson, Debussy. Survivors include his son, Trizten King of Helena, his step son Sylus of Helena, and his partner Katherine Burgess of Clancy. He leaves behind his father, David Mazurek and his mother Bridgette Mazurek of Helena. Dillon was “The Cousin” to several cousins including Jaela (Tony) Nuovo of Los Angeles, Paris Lohman of Monterey, Joseph Lohman of Monterey, Paige Viera of Missoula, Joselyn (Rob) Lawlor of Portland, OR, Harrison (Jamie) Viera of San Antonio, TX, Alivia Ussery of Helena, Justus Holmes of San Mateo, CA, Brett Thomas of San Mateo, CA, Jack Thomas of San Mateo, CA on his mother's side. On his father's side cousins included Tom (Katie) Mazurek of Bozeman, Jeff (Danielle) Mazurek of Helena, Dan (Melissa) Mazurek of Helena, Denise (Jerry) Jordon of Butte, Colleen (Chris) McCowan of Mead, WA, Ryan(Laurel) Mazurek of Bozeman, Mike(Cheryl) Mazurek of Snohomish, WA, Brian(Lacey) of Big Sur, CA, Chris(Melissa) Mazurek of Portland, OR, Joe Hagey of Chicago, Il, Sarah(Derek) Sullivan of Fairbanks, AK, Katherine(Travis) Shaft of Minneapolis, KS, Robert Wighs of Fairbanks, AK, He leaves behind many amazing great nieces and nephews. Dillon was nephew to Bill (Joanne) Holmes of Helena, Vickie (Steve) Lohman of Helena, Daniel Proul of Spokane, WA, Shelly Proul of Portland, OR, Heather Holmes of San Mateo, CA, Jennifer Holmes of San Mateo, CA, William Holmes of San Francisco, and Zachary Holmes of Bozeman on his mother's side. On his father's side he leaves behind Patty Mazurek of Helena, Byron (Sue) Mazurek of Butte, Charles (Skoge) of Clancy, Bill Mazurek of Portland, Sonja (John) Hagey of Fairbanks, AK and Nancy Mazurek of Fairbanks, AK. He was preceded in death by his grandparents Tom and Jane Mazurek, uncle Joe Mazurek, Ben and Lucille Holmes, aunt Julie, aunt Sally and Steve Lohman. Services for Dillon will be held on Friday September 4, 2020 at Clarks Bay Marina, Lakeside at 3 p.m. Please practice social distancing and bring a mask. Memorials in Dillon's name can be made to gofundme.com Dillon Mazurek Memorial (organized by Zachary Holmes) Please observe social distancing and COVID restrictions. Immediate family only. A celebration of life for all next summer.

On Monday morning, August 17, 2020, Dillon Holmes left this earth as the heavens opened up and welcomed the most beautiful man of all time. Known to many as &#8220;the Dill&#8221;, he was born in Monterey, CA on September 4, 1982. He embraced... View Obituary & Service Information

The family of Dillon H Mazurek created this Life Tributes page to make it easy to share your memories.

Send flowers to the Mazurek family.