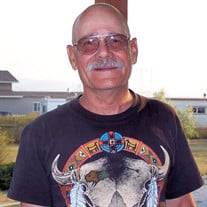 Dean W. Flanagan passed away peacefully with friends & family at his bedside, at Big Sky Care Center in Helena, MT on Nov. 19, 2019, at the age of 82. Dean was born in Albert Lea Minnesota on June 9th 1937 to William George Flanagan and Fern Harriet (Hanson) Flanagan. He attended Albert Lea schools Grades 1 through 10th. As a boy, he worked in onion fields and an auto salvage yard for personal spending money. Dean joined the U.S. Airforce in July of 1954. He went through basic training at Lackland A.F.B, and then, onto Radial Engine Specialist school at Sheppard Field in Texas. From there, he went to Eielson A.F.B Fair Banks, Alaska, to mechanic B-29 weather bombers. He received an honorable discharge from the military at Malmstrom A.F.B in Great Falls, MT. in 1958 where he was with the 29th Air Defense command. Dean met Lola Jean Domer from Helena when he was still at Malmstrom, so when he was discharged, he moved to Helena where he went to work at Eddy’s cake factory on So. Park Ave. He then went to work at Glenny Texaco on 11th and Rodney Street. He married Lola Jean Domer in June of 1958. In May of 1959 Dean and Lola were blessed with a daughter Vivian Jean. Glenny opened a Chevron station on Main and E. Lyndale, and Dean moved with him. In the summer of 1959 he went to work for Barney Norwood until 1963 when he went to work for Peterson Lumber Co, as a yard man and truck driver. In November 1961 Dean and Lola were blessed with a second daughter Penelope Ann. In 1964 Dean worked for Helena taxi, and bought into a Chevron station on Lamborn & Prospect. Selling this out, he drove a bulk fuel truck for Wayne Hicks. In midyear 1964, Dean took over the Enco station at 11th and Roberts streets where he managed until 1969, when, in addition, he took over the Enco station on Prospect and Roberts streets. He operated both stations until 1972 when the fuel shortages forced closure of his and many other stations. He then drove truck over the road for 1 year for Blue Ribbon Foods. In 1973 Dean went to work for the city of Helena, as a service and tire man. In 1978, Dean and Lola divorced, and in that same year, Dean met his soul mate, Karen VerSteegh. Dean was also promoted to night equipment operator on the City of Helena Street Dept. In 1980 he was promoted to City Street Forman. He married Karen and her two children in Feb 1988. In 1989, Dean held the temporary street supervisor position until Bill Michelson was hired. Dean retired from his street foreman job in in 1993. He enjoyed his retirement working on his old cars and trucks, loving several generations of spoiled kitty cats. He loved spending time with his family and friends. Dean had a good gift of gab, and enjoyed meeting people and making new friends, he was generous and helped people whenever he could. Dean is survived by his wife Karen; Daughters & spouses: Vivian & Chuck Allen of Columbia Falls, MT. and Penelope & Pete Quien of Whitefish, MT.; Karen’s children and spouses: Aaron & Michal Flanagan of Great Falls, MT, and Toni VerSteegh of Laramie, WY.; Grandchildren: Amanda, Joshua, Amber, and Eva; 2 great grandchildren; His sister & her spouse: Patricia & Jon Syverson of Albert Lea, Minnesota: and several nieces and nephews. Dean was preceded in death by parents William G. and Fern H. Flanagan and his brother Michael Flanagan, of Albert Lea, Minnesota. As per Dean’s wishes, a family celebration of life will take place sometime in the spring, instead of a funeral. The family would like to express our thanks to Compasses Hospice, and Big Sky Care Center, for all their kindness and support trough-out Dean’s illness. Please send any memorials to the Lewis & Clark Humane Society.

Dean W. Flanagan passed away peacefully with friends & family at his bedside, at Big Sky Care Center in Helena, MT on Nov. 19, 2019, at the age of 82. Dean was born in Albert Lea Minnesota on June 9th 1937 to William George Flanagan and Fern... View Obituary & Service Information

The family of Dean Flanagan created this Life Tributes page to make it easy to share your memories.

Send flowers to the Flanagan family.