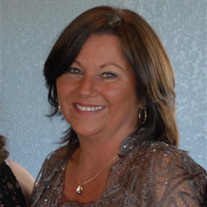 Casey passed away peacefully on the evening of October 14, 2018 in Helena, Montana surrounded by her immediate family, after a brief battle with cancer. She was 60 years old. Casey was born in Canoga Park, California on September 21, 1958 to Jerry and Gay (Gaddis) Moran. Casey was the oldest of 3 daughters and is survived by her sisters Kelli and Shannon. Casey was an original valley girl growing up in the San Fernando Valley, she was active in all things ”valley” including helping her dad at the drag strip, all sorts of desert adventures such as dirt bike riding, dune buggy racing and of course, many, many days spent at the beach. Anything with a motor was her passions. She loved speed. On December 28, 1973 at just 15 years old Casey went on a blind date set up through friend with a man named Tony Bruno. The connection between Tony and Casey was immediate and he was the love of her life. Tony and Casey had a life filled with love and adventures the lovebirds were married on September 10, 1983. On May 15, 1978 she gave birth to her baby boy Daniel “Danny”, she loved being a mother, it was truly her calling in life, she had a daughter Rebecca on June 8, 1985 and shortly after a second daughter Jacquelyn on March 19, 1987. Her family was complete and her heart was full. In September of 1990 Tony and Casey relocated their family from the San Fernando Valley, where she lived her entire life to Rohnert Park, California in the beautiful wine country. Some of the best times of her life were watching her children grow up in Sonoma county, all the youth activities and friends kept her very busy. Her involvement is what made her the most fulfilled. In February of 2009 Tony and Casey moved again to Helena, Montana where she loved the change of seasons, especially fall, she loved the mountains and all the people she encountered in the Helena Community. The Big Sky Country is where she felt like she belonged and she was home. Casey most recently worked for Montana Independent Living Project (MILP) but previously worked 8 years at JCCS. She was a CASA and that was her true calling, she loved she did within this organization and was extremely passionate about it. Casey loved the Pacific ocean, the mountains, entertaining friends and most of all her Family & her dogs Joey and Sierra; she treated anyone who entered her home as family and had such a kind heart, she was truly one of a kind. Casey is preceded in death by her Grandparents Barbara & Earl Stockinger, Shirley & Mike Gadis. Her mother Gay Maye, step brother David Croxell, father in law Anthony Bruno, brother in law Michael Bruno & sister in law Lisa Bruno. Casey is survived by her beloved Husband Anthony (Tony) Bruno, her amazing children Daniel (Kaci) Bruno, Rebecca & Jacquelyn (Larry) Demery, as well as her father & stepmother Jerry & Louise Moran, Mother in Law Iona Bruno, Sisters Kelli (Mike) Davis, Shannon (Mike) Hausler, her step sister Theresa (Randy) Bunch, brother in laws John Bruno & David Bruno, her sister in law Amy Bruno, her nieces and nephews Anthony, Katie, Nick, Ben, Maria, Cameron, Kayla and Alexis and her grandson Larry Demery III, great nephews Cooper & Jaxon and great niece Avery as well as more friends than could be named. Casey will be missed and anyone who has encountered her feels the loss in their heart. We love you pooders/poodaki A mass will be held in her honor at the Cathedral of Saint Helena on Wednesday October 24, 2018 at 12:00 pm with a short reception immediately following. In lieu of flowers the family asks that a donation be made in her name to CASA of Helena or Montana Independent Living Project.

Casey passed away peacefully on the evening of October 14, 2018 in Helena, Montana surrounded by her immediate family, after a brief battle with cancer. She was 60 years old. Casey was born in Canoga Park, California on September 21, 1958 to... View Obituary & Service Information

The family of Casey Bruno created this Life Tributes page to make it easy to share your memories.

Send flowers to the Bruno family.