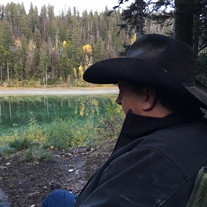 Bryon Lee Wieder was born August 12, 1958 to Robert and Leone Wieder at St. Patrick’s hospital in Missoula. He was the fourth of nine kids. They were raised on the family ranch in Potomac until 1969 when they moved to New Mexico for a short period of time. At the end of 1969 they returned to Bonner, MT. Bryon attended Bonner school, and a short while at Sentinel High School. Until one day he told his Dad he didn’t want to go to school anymore. His Dad told him he had to get a job, so that is exactly what he did, and his hard work ethic stayed with him his entire life. He became a dad to Jamie on March 10, 1981 while living in Arlee, around the rest of his family. A few years later, he moved to Seeley Lake. In 1985 he was working as a wrangler for Cabin Creek Outfitters; while in the mountains doing what he loved most, he met the love of his life, a camp cook named Roxeen. They were married January 16, 1987. They both shared a love for the outdoors and horses. On April 4, 1989 they welcomed their daughter Breanne, and on March 24, 1994, their son Nathan. They owned a fencing and landscaping business, one that Bryon is still very known for to this day. The beginning of 2001 they relocated to Helena. There Bryon was very active with his kids and the 4-H program. They raised show lambs, and he took great pride when the kids finished in the top of their class. He also loved hunting, camping, fishing, and leatherwork, all things he shared with his family. His love for the outdoors and raising animals has been instilled in his children and grandchildren. Many family vacations were spent in the mountains on horseback. Every year he looked forward to the week he could spend away from it all with his family. He is preceded in death by his father, Robert, sister, Cindy, and grandson, Drake. He is survived by his wife, Roxeen of Helena, daughters, Jamie (Jack) Sievers of Arlee and Breanne Wieder of Billings, son, Nathan Wieder of Helena, grandkids, Brylee, Brayden, Emma, Maylee, Colt and Ryle, his mother, Leone Wieder of Missoula, brothers and sisters, Artha (Jody) Malatare, Russ (Julie) Wieder both of Arlee, Debra (Gary) Lucht, and Sharon Wieder, of Missoula, Lola (Dan) Skillman of Helena, Bradly Wieder of Charlo, and Melody (Ivan) Thompson of Lewiston, ID. He is also survived by numerous nieces, nephews, and friends. There will be a memorial potluck service Friday, March 6 at 3:00 p.m. at the Arlee Brown Building, and another memorial this summer at his favorite spot in the mountains to spread his ashes. There will be a third memorial this spring in Helena for family, friends, and co-workers. In lieu of flowers, donations can be made on Bryon’s behalf to the Montana VA Voluntary Service. Checks can be mailed to PO Box 167, Fort Harrison, MT 59636. To offer a condolence or to share a story about Bryon please visit www.helenafunerals.com.

Bryon Lee Wieder was born August 12, 1958 to Robert and Leone Wieder at St. Patrick&#8217;s hospital in Missoula. He was the fourth of nine kids. They were raised on the family ranch in Potomac until 1969 when they moved to New Mexico for a... View Obituary & Service Information

The family of Bryon Wieder created this Life Tributes page to make it easy to share your memories.

Send flowers to the Wieder family.