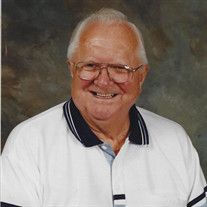 Robert V. (Bob) Hanson passed away peacefully on March 19, 2020, with his son and daughter by his side. Bob was one of eight children born to George & Myrtle (Carlson) Hanson on April 3, 1927, in Mobridge, South Dakota. At the age of three, the Hanson family moved to Harlowton, MT. Bob received his education in Harlowton and was with the class of "46". He lived and worked in Harlowton until his mother was diagnosed with terminal cancer at which time he moved back home to help care for his mother and three younger siblings. After his mother's passing, he moved to Tacoma, WA where he worked for the Bank of Washington. In September of 1954, he moved to Helena. It was in Helena that he met the love of his life, Betty L. Reynolds. They were married on November 13, 1955. Two years later, a daughter, Barb was born. Another two years later, a son, Brent was born. In 1975 Betty passed away. Bob retired from the department of natural resources in 1988 and enjoyed retirement for thirty-two years. He was active in his church, A.A.R.P, the Montana Power Retirees, his ceramics and crafts, the Helena Senior Center and the Sons of Norway. Bob lived and loved life to the fullest and left footprints on the hearts of everyone he knew. If a party needed to be planned or an event organized, he was the one to do it. He will be remembered for his sense of humor, quick wit, and generous nature. Above all, his greatest joy in life was his four grandkids and his six great-grandkids. Bob is preceded in death by his wife Betty, parents George and Myrtle, brothers James, Lloyd, Dean and Donald and sisters Marie and Laura. Bob is survived by his brother John Hanson (Nancy), his daughter and son in law Barb and Rick McAlmond and son Brent Hanson; Grandson T.J. McAlmond (Ashley) and Great-Granddaughter Harlow James; Granddaughters Erica McAlmond Ferradas (Taylor), Great-Grandsons Landon James and Coleman Robert; Michelle Hanson Hallenbeck (Jeff), Great-Granddaughter Brooke Grace and soon to be Great-Grandson Tate Robert; and Shelby Hanson Hughes (Ben) Great-Granddaughter Heidi Lou and Great-Grandson Austin Irvin, numerous nieces, nephews, and a countless number of friends. Bob's family would like to thank all of the staff at Big Sky Nursing Home, as well as those at Hospice for all the love and care that was given to our dad. Due to the current health concerns, a celebration of Bob's life will be held at a later date.

Robert V. (Bob) Hanson passed away peacefully on March 19, 2020, with his son and daughter by his side. Bob was one of eight children born to George & Myrtle (Carlson) Hanson on April 3, 1927, in Mobridge, South Dakota. At the age of three,... View Obituary & Service Information

The family of Bob Hanson created this Life Tributes page to make it easy to share your memories.

Send flowers to the Hanson family.