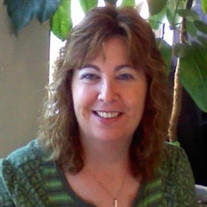 Becky Leigh Benson was surrounded by her family when she passed away peacefully in the afternoon, on October 7th at St. Peter’s Hospital. Becky was born in Helena, Montana on October 25th, 1964 to Harold and Lorna Barry. She attended Montana City Elementary School and attended Jefferson High School for her first three years and graduated from Helena High School. Becky joined the National Guard when she was 18 and served for 10 years where she achieved the rank of Sargent. Her first marriage was to Tim Grove in Germany and was later blessed with their daughter Shelbi in 1992. She met her second husband, Mike, while serving in the National Guard at Fort Harrison in Helena, Montana. They were married on a beautiful fall day September 25th, 1993 in Clancy, Montana. They made their home on top of the mountain in 1994 with her daughter Shelbi. In 1999 they were blessed with their second daughter, Kahsiah. Becky loved spending time with her family and friends while camping or going for side-by-side rides in the mountains, especially in the fall, which was her favorite time of year. She also loved cheering on the Griz football team at the Washington-Grizzly Stadium. You could often find her behind the wheel of a ‘57 Chevy or a 1963 Ford Falcon. She loved her family pets and grand-kitties. For each holiday you could find her driveway and house decorated for the occasion where there would be an excellent meal waiting. Becky drove a school bus for Clancy Elementary School for 12 years before owning a small mechanic repair business with her husband, Mike. Becky was greeted in Heaven by her grandparents; mother-in-law, Mary Ann Benson; and niece Karrah Barry-Dion. Becky is survived by her husband, Mike; children, Shelbi Grove and Kahsiah Benson (Ryan); step-daughter, Erin Payne (Shawn); step-son, Lane Grove (Jessi); parents, Harold and Lorna Barry; brother, Todd Barry (Leslie); sister, Vicki Barry-Dion (Wayne); brother Troy Barry (Michelle); sisters-in-law, Vicki Gruber (Jim), Mary Bair (Bill), Debbie LaRue (Dean); brother-in-law, Pat Bercier; nieces and nephews, Cami Robson (Greg), Marci Parks (Chad), Nic Bair (Vicki), Cori Barry (Chris), Colin Barry-Dion (Alexis), Lance LaRue, Keeley Barry, Shane LaRue (Nicole), Teagon Barry, and Ethan Barry; great nieces and nephews, Dominic Bair, J.P. Robson, Will Robson, Luke Robson, Braden Barry, Cate Barry, Dawson Parks, Kyli Barry, Alli Parks, Jaci Barry, Matti Parks, and Cade Parks; as well as extended family and friends. Services will be held Thursday October 14th, 2:00 pm at Life Covenant Church, 800 N Hoback St., Helena, MT. A reception will follow at Helena Valley Community Center, 3553 Tizer Rd., Helena, MT. A private burial will be held for her family at Fort Harrison Cemetery on a later date. Memorials and donations, in her name, may be sent to Life Covenant Church or Intermountain Children Services in lieu of flowers.

Becky Leigh Benson was surrounded by her family when she passed away peacefully in the afternoon, on October 7th at St. Peter&#8217;s Hospital. Becky was born in Helena, Montana on October 25th, 1964 to Harold and Lorna Barry. She attended... View Obituary & Service Information

The family of Becky Leigh Benson created this Life Tributes page to make it easy to share your memories.

Becky Leigh Benson was surrounded by her family when she passed...

Send flowers to the Benson family.