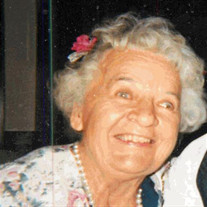 Barbara Joan Rose “Bibsy”, 87, was born May 23, 1931 in Helena, Montana to Albert H. and Ann (Hudoklin) Rose. She lived the greater part of her life in East Helena, moving to Sunset Capital Apartments in Helena after the death of her father in 1989. In 1997 she moved to the Tamarack Group home and lived there 10 years. She became a resident at Apple Rehab-Cooney Nursing Home in January 2007 where she was well cared for and enjoyed activities especially Bingo until the last few years when her vision and hearing became more impaired. Barbara attended St. Ann’s and East Helena Public school and from 1942-1947 was a resident at Montana State Training School in Boulder. For a short time, she was employed at Helena Industries. She rode her bicycle everywhere and was a familiar sight delivering the Mayor’s Letter and grocery store flyers. She loved dogs especially her cocker spaniels always named “Nickel”. She loved being outdoors mowing lawns, planting flowers or shoveling snow. Barbara made countless latch hook potholders and rock animals that were given to family and friends. Barbara was preceded in death by her parents Albert and Ann Rose, brother Al “Bud” Rose, grandparents, uncles, aunts, cousins, nieces and nephews. She was a member of Sts. Cyril & Methodius Church, St. Louis Lodge #43 and East Helena Senior Citizen club. Barbara was never married but was a special aunt to Dan Maness, David and Buzz Rose in their growing up years. They enjoyed countless hours at the cabin at Hunters Gulch riding the Tote Goat, fishing the creek and Sawing wood. Survivors include her sister Iris Maness, nephews Dan Maness, Al “Buzz” (Eileen) Rose, Andy Rose and Karl Rose. Barbara is also survived by a large group of cousins, nieces and nephews and great nieces and nephews as well as her good friend Lucille Stump who were special to her. The family would like to extend a special thank you to the caring staff at Apple Rehab Cooney for their devotion to Barbara. There will be funeral services at Sts. Cyril & Methodius Church in East Helena, Thursday, March 14, 2019 at 12:30 pm, followed by burial at St. Ann’s Cemetery next to her parents. Memorials are suggested to the Lewis & Clark Humane Society, PO Box 4455, Helena, MT 59601

Barbara Joan Rose &#8220;Bibsy&#8221;, 87, was born May 23, 1931 in Helena, Montana to Albert H. and Ann (Hudoklin) Rose. She lived the greater part of her life in East Helena, moving to Sunset Capital Apartments in Helena after the death of... View Obituary & Service Information

The family of Barbara "Bibsy" Rose created this Life Tributes page to make it easy to share your memories.

Send flowers to the Rose family.